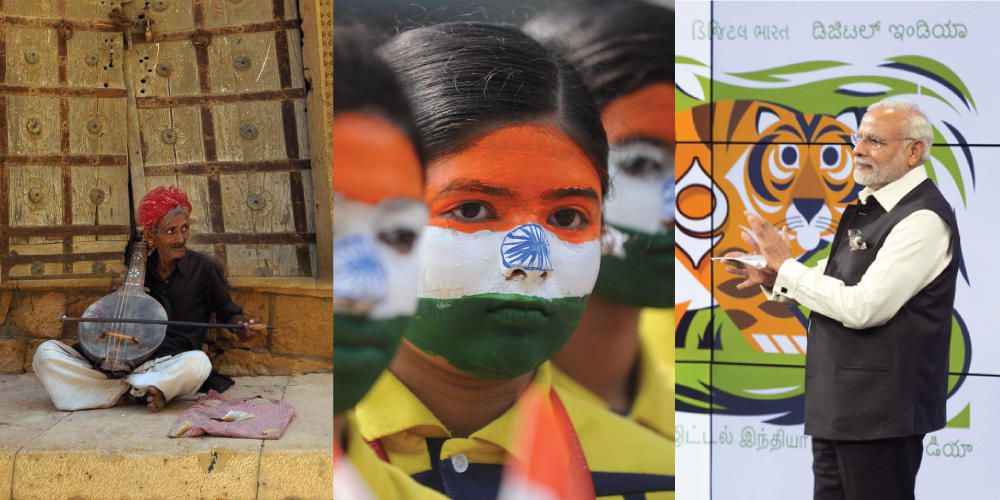 Many people think of India as almost synonymous with “diversity” – diversity in culture, religion, language, and landscape. It is also on track to become the world’s most populous country within a decade. With over half its population—nearly 600 million people—under the age of 25, India’s youth occupy a special place in shaping the future. One area India leads is high tech; India has some of the most prestigious universities focused on science and technology, and its graduates are highly sought after by companies like Google, Facebook, and others. 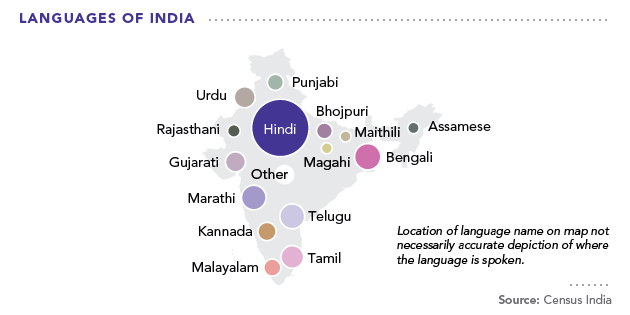 India is sometimes described as more like a continent than a country. One reason is its linguistic diversity, with 22 official languages that are recognized by the Constitution and used in different regions by state governments. There are also more than 100 languages that are not official, but have more than 10,000 speakers. Some of these are classified as “vulnerable” or “endangered" because fewer and fewer people are speaking them.

Only two languages, Hindi and English, are used by the Government of India under the Official Languages Act, 1963. But the status of these two ‘national’ languages is complicated. Hindi has more speakers than any other Indian language; 422 million people, or 41% of the population, speak it as their first language. In 2014, the national government directed the country’s civil servants to prioritize Hindi over English on their websites and social media. Their rationale was that Hindi is an Indian language, whereas English is not.

Some Indians, especially in non-Hindi speaking regions in the south, are wary of the government promoting Hindi. They believe that making Hindi to the sole language used by the national government would give Hindi speakers in the north an advantage, whereas English is as an ‘equalizer’ because it is no one’s first language, and therefore levels the playing field (see “Comment” article below). 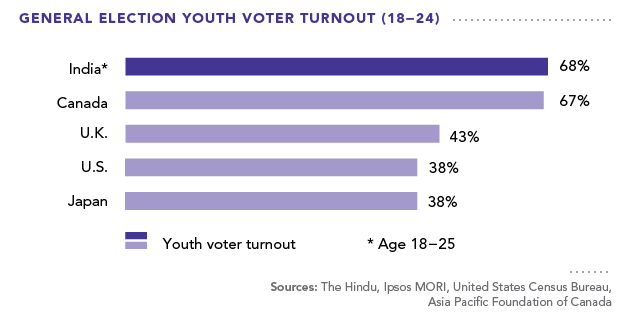 India is the world’s largest democracy; in its most recent general elections in 2014, 814 million people were eligible to vote. India is also one of the world’s youngest countries, with roughly half its population under the age of 30 (see population pyramid, page 2). Unsurprisingly, some of India’s political parties have tried to win over the youth vote by fielding younger candidates—India’s major political parties are traditionally dominated by older leaders—and by connecting with them through social media.

The general issues that animated many voters in the 2014 election included government inefficiency, corruption, crime, inflation, and economic growth. India’s youth voters shared many of these and related concerns, especially government corruption, the safety of women, unemployment, and education.

An interesting new dimension in future elections in India is the participation of Non-Resident Indians (NRIs): Indian citizens who have migrated to other countries temporarily, such as for work or education. There are an estimated 11.4 million NRIs around the world, including 184,000 in Canada. The Election Commission of India (ECI) has been trying to increase awareness among these voters through the “Every Indian Vote Counts” digital campaign. 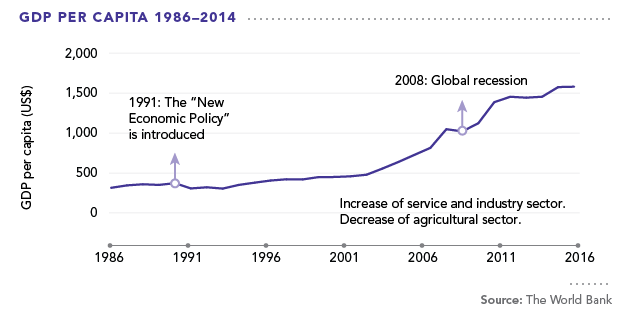 India has one of the world’s fastest-growing economies. In 1991, its government introduced a set of reforms called the “New Economic Policy.” India has been in the top 10% of countries in terms of the rate of its economic growth. In recent years, a major source of this growth is its services sector, which contributed to 57% of the country’s Gross Domestic Product (GDP) in 2013-14. Information technology (IT) and related services are especially significant.

In addition, India has made significant strides in human development. For example, in 1990, India’s infant mortality rate (the rate at which children die before they reach the age of one) was 88 deaths per 1,000 live births. As of 2015, that number declined to 40. In 1991, its adult literacy rate was less than half the population, at 48%. Today, that number has climbed to 72%.

Despite the high rates of growth and human development gains, not everyone in India is benefitting equally. Like so many other countries, India is experiencing a widening socio-economic gap, especially between rural and urban areas. Some rural areas still lack basic infrastructure such as indoor plumbing and electricity, and structural problems such as transportation networks make it more difficult for rural areas to develop. Cities, meanwhile, have received most of the benefits of economic development, including benefits from global imports and access to the world distribution channels.

SBS, Comment: Hindi or English? The Politics of Language in India

TIMES OF INDIA, Learning with the Times: India Doesn’t Have Any ‘National Language’

FACTLY, Are You an Overseas Indian Willing to Vote in Indian Elections? Here is Something for You

TIME, In India, 150 Million People Will Be Voting For The First Time This Year

THE HINDU, Gap Widening Between Rural and Urban India 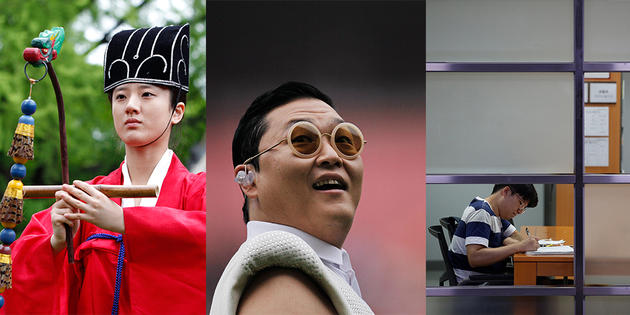