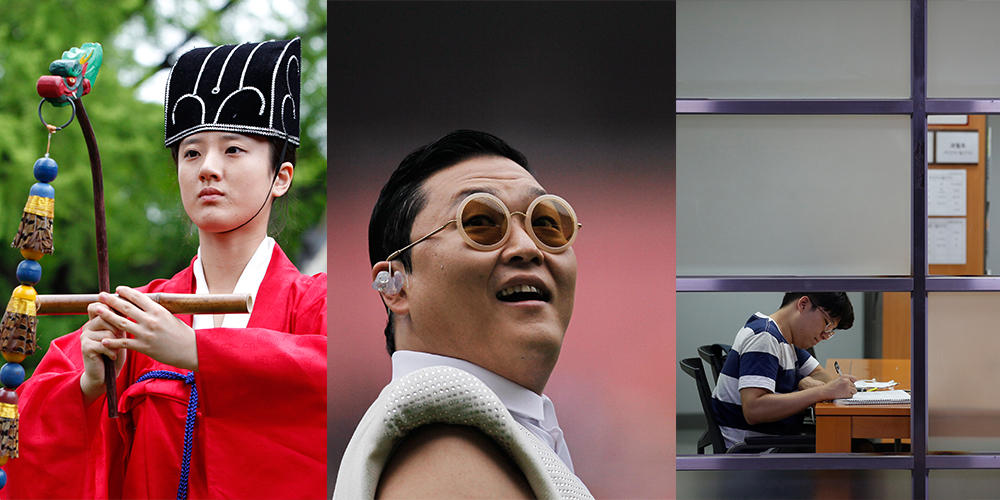 South Korea is a geographically small but densely populated country in Northeast Asia. In recent years, its international profile has grown because of the success of K-dramas (Korean TV programs) and K-pop (Korean pop music). One of the most world-famous Koreans is pop artist Psy (pictured above, centre) due to his 2012 hit song, “Gangnam Style.” South Korea is also known internationally for its strong emphasis on education, which is both a source of pride and stress for many of its people. 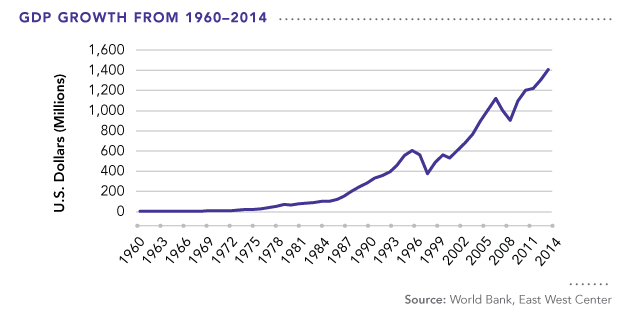 South Korea’s path to becoming a wealthy country is impressive, and is a source of inspiration for other developing countries in Asia. In 1960, South Korea was mostly agrarian and depended on foreign aid. Its per-capita gross national income (GNI) was only US$67. After the government introduced industrialization policies and promoted growth through exports in the 1970s, the economy took off. Per-capita GNI is now US$33,000. This achievement has been referred to as the “Miracle on the Han,” a reference to the Han River, which runs through the capital city of Seoul.

South Korea’s economic growth got a boost by having a highly educated population, and by government policies that promoted certain industries. One of the beneficiaries of these policies were chaebol, large family-run corporate conglomerates (chae means “wealth” and bol means “clan”). These companies are often involved in a broad range of businesses, from textiles to grocery store chains to cars and phones. Samsung and Hyundai are two of the most famous chaebol.

However, Many South Koreans feel the chaebol have widened the income disparity between rich and poor because, they say, the chaebol provide temporary jobs, but not the long-term and full-time jobs more Koreans need.

The Gains, and Pains, of South Korea's Education Craze 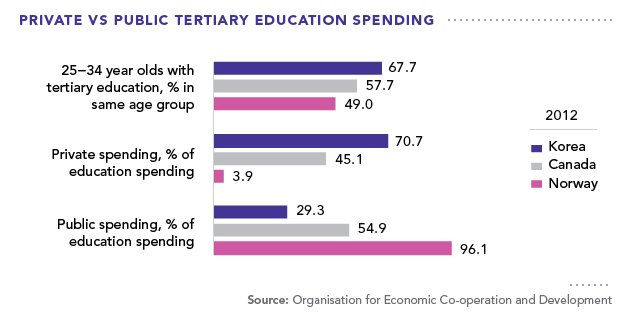 South Koreans are an educated bunch. Two thirds of its people between the ages of 24 and 35 have a university or college degree, which is higher than in Canada. And international tests of high school students’ reading and math skills rank South Koreans near the top. This impressive education performance is a source of national pride. It has also been an important factor in South Korea’s economic success; because the country does not have many natural resources, it relies on a highly educated population to stay competitive.

But South Korea’s education ‘obsession’ has serious costs in terms of both money and quality of life. Surprisingly, the government in South Korea spends less on education than in many other countries. Instead, many education expenses are often paid for by parents, who sign their children up for extra English, math, music, and art lessons. Korean students often attend cram schools, also known as hagwon, or meet with private tutors for as long as five hours after a full day of school. The government has tried to lower the education pressure by requiring hagwon to close no later than 10 p.m. But some parents have protested this decision. 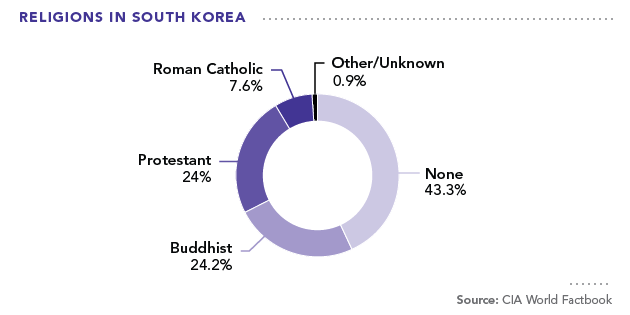 South Korea is very ethnically homogeneous, but religiously diverse. In the sixth century, Chinese Buddhist monks introduced both Buddhism and Confucianism to Korea. The earliest signs of Christianity can be traced back to the 16th century, before gaining momentum through Western missionaries in the 18th and 19th centuries.

In 1985, approximately 20 per cent of the South Korean population identified as Christian, a number that has risen to approximately 30 per cent within the last decade. Some scholars have linked the rise of Christianity to the industrialization of the country and American influence after the Korean War (1950-53). Presidential politics has also played a role: South Korea’s first President, Syngman Rhee, was a convert to Methodism. More recently, President Lee Myung-bak was a leader of the Somang Presbyterian Church and was strongly supported by South Korea’s Protestant population.

Religion has also played a key role in the Korean diaspora. For example, the heavy representation of Korean Christians in the U.S. can be explained by the fact that most Korean Christians are young adults are from urban and middle class families, which are more likely to immigrate. Korean Christians also tend to migrate more to the U.S. than do Korean Buddhists or Confucians because they see the U.S. as a Christian country.

According to the Korean World Mission Association, there are approximately 14,000 South Korean Protestant missionaries who conduct missionary activities in places such China, North Korea, and Afghanistan.

CHOSUN ILBO, 60 Years of the Republic: Park Chung-hee and the Miracle on the Han River

THE ECONOMIST, The Chaebol Spurn Change

THE ECONOMIST, Why South Korea Is So Distinctively Christian

Have you eaten yet (how are you)? 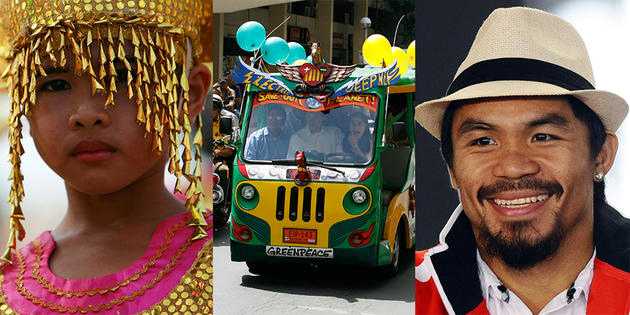 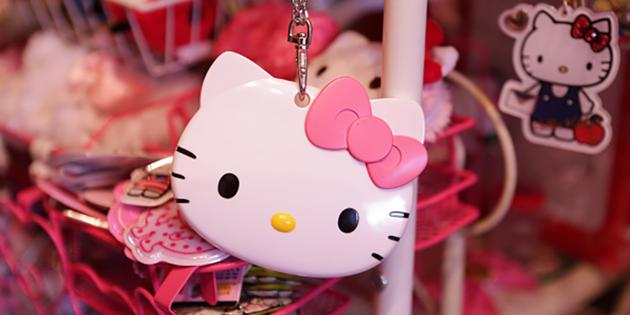