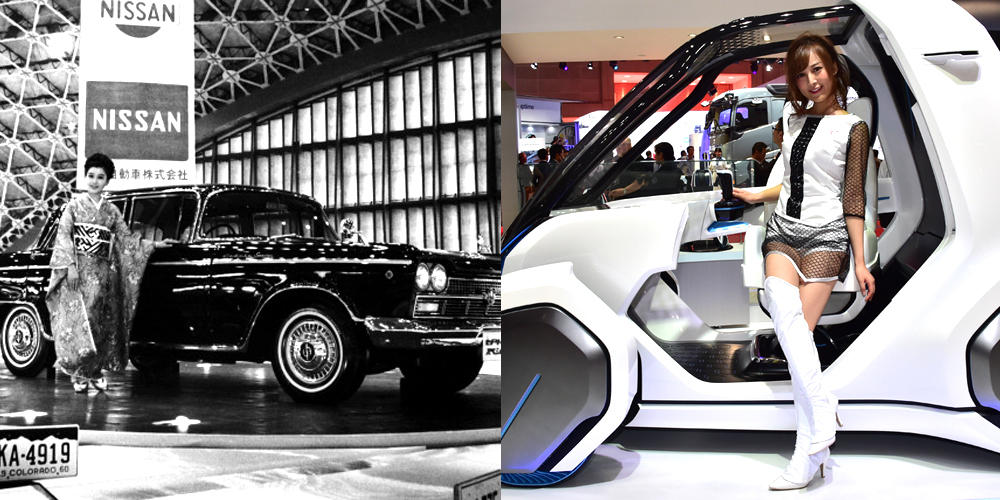 Japan’s Car Makers: Past Success and the Race for the Future

Japan’s dominance in the global car industry took off in the 1960s. The photo on the left is from a car show in 1965, when Nissan, one of Japan’s top car companies, was displaying the Cedric Special. The photo on the right is from a car show in Tokyo 50 years later, in 2015. In this photo, Toyota, another top Japanese car company, shows off the Coms Connect concept car. It was part of the show’s focus on cars that are eco-friendly and can drive themselves.

Japan knows how to make the kind of cars that people want to drive. The evidence is the many Toyotas, Hondas, Nissans, Mazdas, and Subarus found in garages and parking lots all over the world, especially North America (see Figure 1). In 2015, six of the 20 largest auto companies were Japanese, and in 2016, Toyota was the world’s #1 car company. 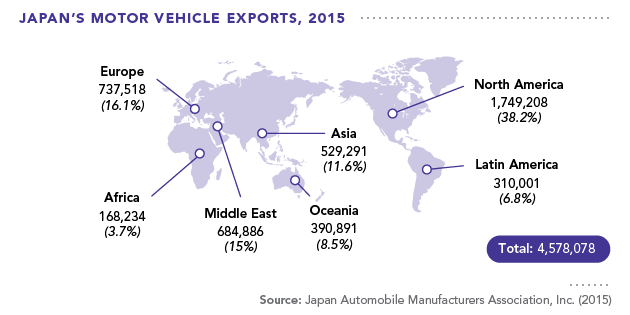 Japan’s climb to the top of the global car industry hasn’t been easy. In the years leading up to and during the Second World War, Japan’s motor vehicle companies were limited mostly to making trucks, buses, and military vehicles to support the country’s Imperial policies. By the end of the war, Allied bombing had destroyed much of Japan’s infrastructure for making vehicles. In the years immediately after the war, the Allied occupation led by the United States continued to limit Japan’s auto companies to making a small number of buses and trucks. Some of these companies caught a break in 1950 with the onset of the Korean War (1950-53). The United Nations forces’ war effort, led by the U.S., required vehicles, and neighbouring Japan was a convenient place to provide them.

The decades that followed brought new challenges for Japan’s car companies. For example, in the 1950s and 1960s, Japan did not have many domestic buyers for its cars. These were the years before the country’s big economic take-off, and few Japanese families were able to afford their own car. Japan’s car companies therefore built cars for export to other parts of the world, like North America and Europe. But these early cars had an image problem: they were seen as affordable, but unstylish, and had a reputation for being of “cheap” quality. In fact, it is reported that in the mid-1950s, Japan’s own Prime Minister “refused to be driven in domestic-made cars for fear they would break down.”

Japan adapted to and overcame these challenges. By the 1970s and 1980s, Japan’s leading car companies had made improvements, and more and more consumers around the world were attracted to the affordability of Japanese cars and their improved reputation for reliability. One Canadian journalist said that while Japanese cars were “once decried as cheap junk,” they had become “the standard for quality (see Figure 2). In fact, in the 1980s, Japan’s export success led to another challenge: calls from politicians in the U.S. to limit imports of Japanese cars in order to protect American car companies. This protectionist argument was based on criticism that Japan was not operating according to principles of free trade, specifically that it was not opening up its own market enough to cars from other countries. To be sure, in 1984, the U.S. trade deficit with Japan was almost US$37 billion, higher than the trade deficit with any other country. Once again, the Japanese companies adapted, and began moving parts of their production process to the countries where they were selling cars. That includes Canada—Toyota and Honda, two of Japan’s largest car makers, have car assembly plants in Ontario. 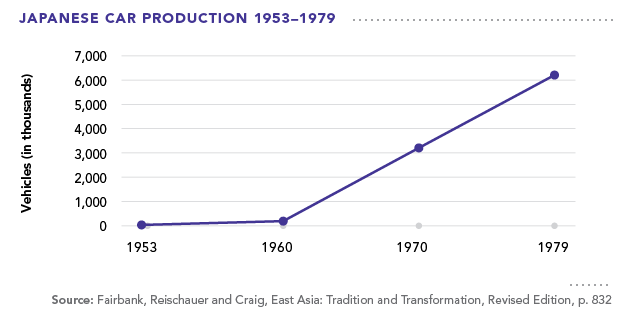 With so much success behind them, the big question facing Japan’s car companies today is whether they are up to the task of making the next leap in building the cars of the future.

The “great race” to make the cars of the future

According to Levi Tillemann, an analyst of the global auto industry, Japan and the U.S. “lead the world in developing the cars of tomorrow.”1 By this, Levi means two things: cars that don’t rely so heavily on fossil fuels, and cars that can drive themselves.

The stakes of winning the “great race” to design and build electric and self-driving cars are tremendous: by some estimates, it could be “the most transformational social development since the World Wide Web. It will change the way we live and many fundamentals of the global economy.” It is therefore no surprise that Japan and the U.S. are facing stiff competition, especially from China, but also from Germany and South Korea.

Some critics within and outside Japan have expressed doubts that the country still has what it takes to stay ahead of the pack. But history gives us good reasons to bet on Japan: its “history of being the first to roll out world-class innovations in transport.” This includes not only cars, but also the world’s first high-speed bullet train, which was showcased at the 1964 Summer Olympic Games in Tokyo. More recently, in 2016, the Japanese-made maglev train, the gold standard in high-speed rail transport, broke a world record when it reached a speed of 603 km/h. 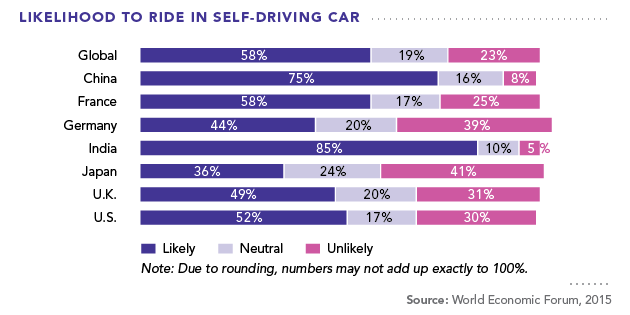 The 2020 Summer Olympic and Paralympic Games will be an opportunity to impress the world again. The Japanese government is hoping to use the event to showcase the country’s progress in developing the next generation of cars. It plans to have self-driving cars available to move Olympic athletes around the city. (In addition, a group of Japanese inventors is hard at work developing a flying car that they hope can also be showcased at the 2020 Games.) The roll-out of this next generation of high-tech vehicles may be an opportunity, not just to entice foreign customers, but also to convince Japanese customers of their safety. According to one recent survey, may Japanese drivers were still hesitant to take a ride in a car that did not have a human driver behind the wheel, far fewer than the global average (see Figure 3).

Cars of the future will be good for Japan

Unlike the 1960s, when Japan did not have a large domestic market for its cars, the 21st century will be a different story. One reason is that Japan has no oil and gas resources of its own, so it has to import these fuels from other countries. Switching to more electric cars would lessen Japan’s carbon footprint, while also lessening its sense of insecurity at having to rely so much on other countries to fuel its vehicles.

Another reason is that Japan’s population has a large and growing proportion of elderly people. Many people, as they age, experience a weakening of their eyesight and mobility, and a slowing of their reaction times. If these elderly drivers get behind the wheel, they run a higher-than-average risk of getting into traffic accidents. For example, in 2016, Japanese people over the age of 75 were responsible for nearly half the cases of driving down the road in the wrong direction (see Figure 4). 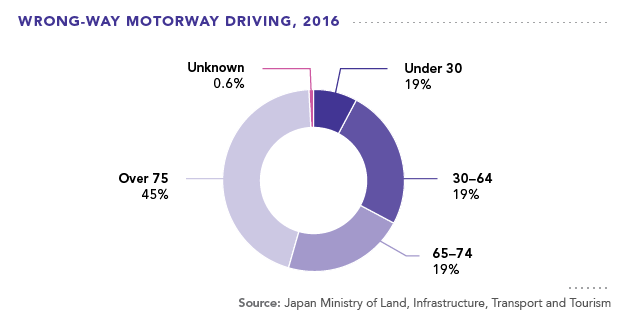 The consequences can be tragic; while the overall death toll from car accidents has been declining in Japan, recently hitting a 67-year low, in 2016 the percentage of driving fatalities involving elderly drivers had almost doubled. By switching to self-driving cars, older Japanese would be able to maintain some of their independence in going to the store, going to doctor’s appointments, and going out to visit family and friends. And the benefits of self-driving technology are not limited to cars. Nissan, for example, has designed “self-driving chairs” that could be used in Japan (or elsewhere) by customers waiting in line at a restaurant or queuing up to get into movies, concerts, or museums.

In the 20th century, Japan’s car companies defied many people’s expectations. The world will be watching in 2020 and beyond to see if they can do so again. But even if Japan is not the first to roll out the cars of the future, their experience in the 20th century shows that being a latecomer does not mean that you can’t still be among the best.

STANFORD PROGRAM ON INTERNATIONAL AND CROSS-CULTURAL EDUCATION, Learning from the Japanese Economy 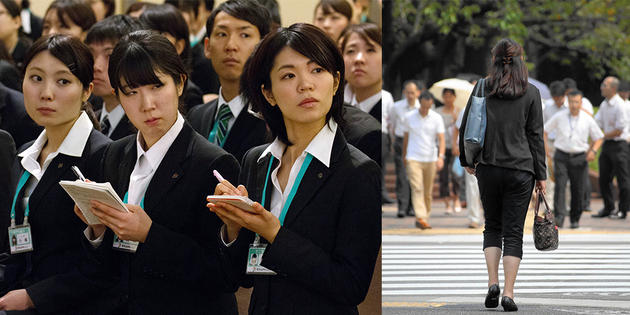